The newest addition to the Stronghold range, the Kolink Stronghold Overseer offers a comprehensive set of features for an attractive pricepoint. Equipped with a pair of 12cm PWM fans, the Overseer has space for ATX motherboards, 340mm VGA cards both horizontally, or vertically using a PCI-E riser cable (sold separately), 175mm CPU coolers and both 360mm radiators on the front panel, plus 280mm radiators on the top panel. With a side panel made fully of tempered glass, the Stronghold Overseer ticks all the boxes and then some!

The Features of the Kolink Stronghold Overseer at a Glance

The Kolink Stronghold Overseer comes with a pair of 12cm PWM fans installed as standard. These fans offer both good performance and low noise, and can be automatically speed controlled through connecting them to your motherboard's PWM headers. The vented aluminium effect front panel also contributes to the good airflow of the case. Users are also free to install a 360 mm radiator in the front, plus a 280mm radiator in the roof.

Aside from the pre-installed fans, users are also free to install two more 120/140mm fans in the roof, and two 120mm fans at the front. The roof is where a magnetic dust filter can be found installed on the honeycomb-style mesh. A full tempered glass side panel shows off your system build, and is secured with 4 thumbscrews.

The interior comes entirely in black, with a PSU shroud that only adds to the sleek and unobtrusive look. Behind the shroud is where users will find space for a pair of 3.5″ HDD's in the HDD cage provided. Alternatively, 2.5″ SSD's can be installed here, or next to the motherboard. The motherboard tray and PSU shroud both offer numerous openings for optimum cable management, with up to 34mm cable management space. Underneath the case is a removable dust filter suitable for an ATX PSU up to 190mm.

Graphics cards can be up to 340mm long, mounted both horizontally or indeed vertically using the supplied GPU mount and a PCI-E riser cable (sold seperately). CPU coolers up to 175mm tall are also supported. Additionally, the I/O panel located at the front possesses two USB 2.0 ports as well as a pair of USB 3.0 Type-A ports. 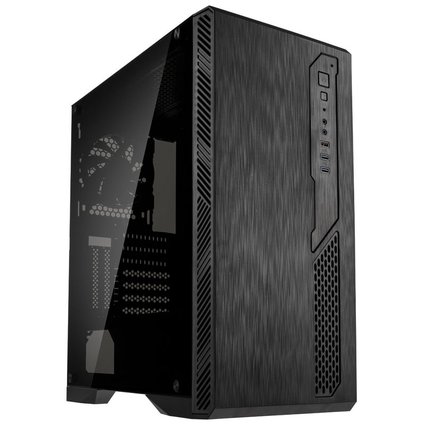