In addition to a variety of value-oriented cases and an extensive selection of accessories, the Hungarian manufacturer Kolink has also been offering power supplies of varying power outputs as well. Following its successful entry into the German market for PC power supplies at the end of 2015, Kolink has now added the Core series to its portfolio, demonstrating that inexpensive power supplies are possible without the customer having to forego fundamental quality features. In keeping with the name, a Kolink Core power supply delivers everything that is really important while retaining many desirable features. All in all, the Core series is not only fundamentally sound in technical terms, but is also scarcely more expensive than widely used no-name brand products.

For the entry-level series, for example, Kolink relies on 80 Plus certification which guarantees an efficiency of more than 80 percent at 115 volts at 20 percent utilization. In the context of the European 230 V network, all models in the Core Series meet EU Regulation No. 617/2013, which has mandated a minimum efficiency of 82 to 85 percent for all power supplies used in complete PCs since July 2014. Since the obligatory requirements for standby power consumption and standby efficiency are also met, Kolink Core power supplies are therefore not only inexpensive, they are also ideal in that they are the go-to legally compliant choice for all integrators and system builders.

Kolink Core 1000 offers a continuous rated power of 850 W with a max rated power output of 1000 W. In addition to the 20+4-pin ATX connector for the motherboard, the 1,000 Watt model offered here has a 4+4-pin EPS12V connector for the processor and four 6+2-pin connectors for the graphics card. Five SATA and three Molex connectors are available for the other components. As such the Kolink Core 1000 Watt can even keep gaming systems with high-end graphics cards supplied with power, and all at an inexpensive price to boot.

It is also worthy of note to mention that Kolink - unfortunately a member of a diminishing number of power supply brands - carries out both their product design and final quality checks entirely within Europe before delivering to specialist retailers, system integrators and end customers. In spite of the aggressive pricing of the product, there's also no doubt that that this is a completely premium retail product capable of meeting the demands of customers across Europe. Needless to say, the power supply above all else must be capable of functioning reliably to ensure that your PC as a whole runs well over the long term.

On the other hand, Kolink has made savings on aspects which most users in this price range do not value too much. For one, Kolink delivers all power supplies without the standard kettle-style cable. This protects the environment and reduces costs and is viable due to the fact that most potential buyers already have a compatible cable. Kolink also takes a minimalist stance when it comes to aesthetics, the cable harnesses are held together by functional cable ties instead of elaborate sleeving. The surface is simply painted black, meaning the power supply is barely noticeable when installed in the PC. In short: If you're on a tight budget, the Core power supply series is currently the best choice out there.

Note: As a measure to protect the environment, the manufacturer does not include a power cord for connection to the mains. 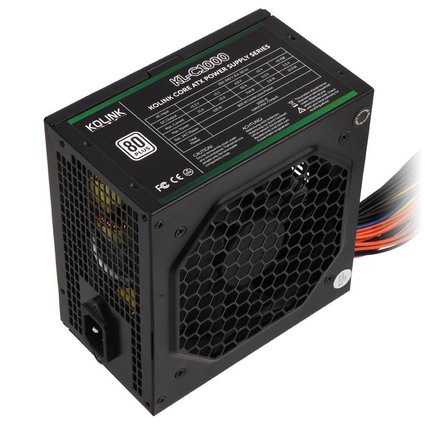