Unique design and superior functionality: these are the characteristics that Kolink elected to define their new Void Midi-Tower. Not to say it doesn’t deliver in the looks department, its front has a V-shaped cut-out equipped with digitally addressable RGB-LED strips, the effect of which is taken up another notch thanks to the use of the infinity mirror effect. A rear mounted pre-installed 120mm fan, which is also kitted out with digitally addressable RGB-LEDs, cool and illuminates the spacious interior of this exceptionally stylish Midi-Tower. The hardware you choose to install is also put on show: the tempered glass side panel leaves little to the imagination. All in all, the Kolink Void sets itself apart with its use of modern yet functional design.

The Features of the Kolink Void at a Glance

- Tempered glass side panel for unobstructed view of the interior

- Support for radiators up to 240mm in the front

- PSU shroud with air inlets for a cleaner look

The digitally addressable RGB-LED strips, the effect of which is heightened with Kolink’s bold move to integrate a kind of infinity mirror effect into the case, can be controlled via a switch on the I/O panel. This also holds true for the rear-mounted 120mm fan that comes pre-installed. Alternatively, the strips and the fans can be hooked up and controlled using a compatible motherboard thanks to its use of a standard 3-pin (5VDG) connector. This then allows the RGB-LED button to be used as a reset button instead. The tempered glass side panel allows users to enjoy a panoramic view of the lighting used inside the Kolink Void.

The Kolink Void: More than Enough Space for Hardware 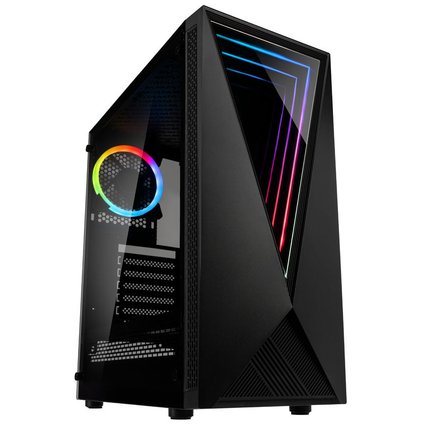