From the popular Inspire series comes a new entry into the series - The K9 ARGB Midi-Tower. With an aesthetically pleasing front panel design featuring an ARGB strip that also extends across the PSU shroud, the Inspire K9 Midi-Tower is great for those who prefer both a subtle front panel design alongside ARGB functionality.

The Features of the Kolink Inspire K9 ARGB at a Glance:

The Kolink Inspire K9 features an angled front ARGB strip, which also extends across the PSU shroud, along with a rear 120mm ARGB fan, controlled by the I/O panel RGB button or via connection to your motherboards 3-Pin 5VDG connector using the applicable software. The front panel features a predominantly matte black finish, with ventilation on both sides. Users are also free to install up to a 240mm radiator in the front and a 120mm at the rear.

Aside from the pre-installed fans, users are also free to install three 120mm fans on the front panel, plus two 120mm fans in the roof. A full tempered glass side panel shows off your system build in style.

The interior comes entirely in black, with a PSU shroud that only adds to the sleek and unobtrusive look. Behind the shroud is where users will find space for a pair of 3.5" HDDs, using a 'drop and lock' system to secure. Alternatively, 2.5" SSDs can be installed here, directly on top of the PSU shroud or next to the motherboard. Underneath the case is a removable dust filter suitable for an ATX PSU up to 180mm.

Graphics cards can be up to 30cm long and CPU coolers up to 15.5cm tall. Additionally, the I/O panel located at the front possesses two USB2.0 ports as well as a USB3.0 Type-A port. 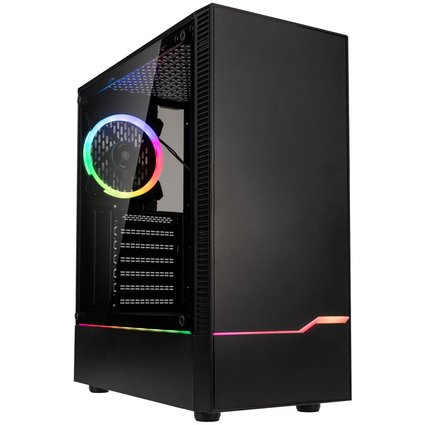