THE FEATURES OF KOLINK UNITY NEXUS ARGB MID-TOWER CASE AT A GLANCE:

A NEW ERA IN QUALITY

The interior of the Kolink Unity Nexus comes entirely in black, with a PSU shroud that adds to the sleek and unobtrusive look. Behind the shroud is where you’ll find space for a pair of 3.5" HDD’s. Alternatively, 2.5" SSDs can be installed here. There is also space for a pair of 2.5” drives on the back of the motherboard plate, using the removable brackets provided. Underneath the case is a removable dust filter suitable for an ATX PSU up to 250mm. A full, quick release, tempered glass side panel shows off your system build in style.

Graphics cards can be up to 415mm long, or 345mm if using a 45mm thick radiator and 25mm thick fans. CPU coolers up to 180mm tall are also supported. Up to triple-slot GPUs can be also installed vertically, using the supplied mount and a compatible Kolink PCI-E riser cable sold separately. Additionally, the side-mounted I/O panel located at the front possesses 1 x USB3.2 Gen 2 Type-C, 1 x USB 2.0 port as well as 2 x USB 3.0 Type-A ports and HD-Audio connectors. These feed directly behind the motherboard plate for easier cable management. 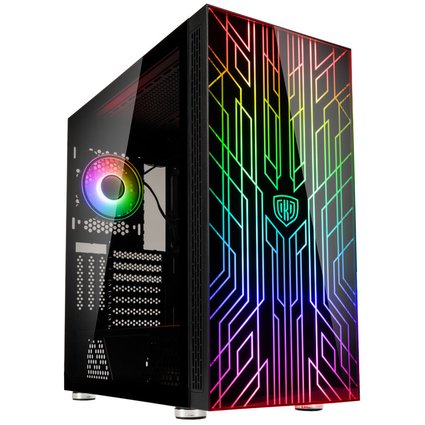