Kolink introduces the new Quantum Midi-Tower! This is a feature-rich case that is perfect for gamers, and behind its attractive exterior lies a remarkable amount of space for powerful gaming hardware. In fact, even large E-ATX form factor motherboards will fit, meaning that even the ultimate no-compromises gaming PC will fit with space to spare. Needless to say, all this will be on show via the tempered glass side panel, with the unsightly elements such as cables being cleverly concealed behind a power supply shroud. The front of the case is distinguished by the presence of a diagonal mesh cut-out, which ensure a consistent supply of fresh air and optimal airflow to all your components. What makes this a little special however, is that it also comes with an inbuilt digitally addressable RGB-LED strip, along with a pre-installed 120mm fan, which likewise has its own dRGB-LEDs. Attractive looks and effective airflow, this case has it all. Want to go into stealth mode? There's a handy switch directly available on the I/O panel for that. Alternatively, the strip and the fan can also be hooked up directly to the motherboard and controlled that way instead. For additional cooling, users will be pleased to note the presence of a honeycomb-style mesh with its own integrated dust filter in the roof.

The Features of the Kolink Quantum Midi-Tower at a Glance:

- Vibrant dRGB lighting on the front

- Up to five 120mm fans compatible

Kolink Quantum: The Space You Need

Even though the outer dimensions meet the specs of a Midi-Tower, the Quantum offers a specially designed layout that allows motherboards up to E-ATX format to fit comfortably. Even 340mm long graphics cards that stretch out to the front of the case will fit. CPU coolers aren't a problem either, given the presence of 155mm of vertical clearance which is more than enough for all but the most exotic of coolers. A smart shroud is present that helps cover up the power supply and the HDD cage, in which users have the choice of installing either two 3.5"- or two 2.5" drives. The rear of the motherboard conceals some handy brackets that allow the installation of another two 2.5" SSDs should you require. A subtle curve on the right side of the case enables users to benefit from the extra cable storage space, despite the case as a whole remaining unobtrusive.

For the fans of traditional air cooling out there, we've got you covered: there's more than enough slots for 120mm fans, in fact the mesh cut-out front of the case and the side-facing air inlets supply air to potentially two 120mm fans. The roof allows for two 120mm fans to be installed as needed. Equipped with a honeycomb mesh in the roof, the case has perfectly optimised to keep the central component cool as well as dust free over time. Conveniently, Kolink also thought to include a magnetic dust filter for convenient cleaning. The added benefit of this of course is the fact that the interior won't need constant cleaning. One 120mm fan with dRGB LEDs comes installed at the back of the case. Want to water cool? No problem, just install up to a 240mm radiator in the front of the case, while the rear-mounted fan can simply be replaced by a 120mm radiator if you prefer.

Tempered Glass and RGB-LEDs: Get Your Hardware Looking Good

The clever combination of cable guides and ties mean that users are going to love the layout of their new system in the Quantum. The spacious interior complete with your gaming gear can all be admired through the tempered glass side panel. The diagonal mesh cut-out with dust filter is illuminated with digitally addressable RGB-LEDs, control of which is possible thanks to the presence of the switch on the I/O panel which also allows handy access to switching between light effects, and this also holds true for the lighting on the rear-mounted fan. Alternatively, the RGB lighting of the strip and the fan can be controlled by hooking it up to your motherboard directly. This then allows the RGB switch on the I/O panel to be used as a reset button. Aside from the RGB/Reset switch, there's also a handy USB 3.0 port and two USB 2.0 ports along with the standard 3.5mm jacks for headphones and microphones, not to mention power- and HDD-LEDs. 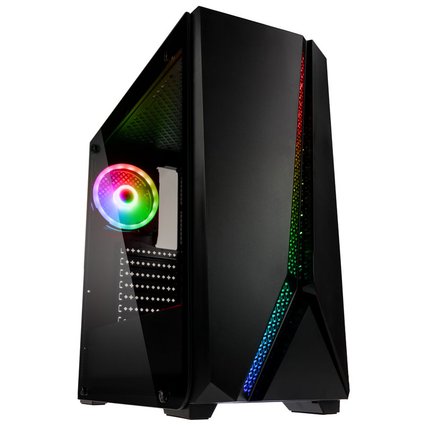