The Inspire K11 is an outstanding Mid-Tower from Kolink. The latest addition to the Inspire line, the K11 features an impressive front panel consisting of a series of aRGB enabled strips. It is also notable for the inclusion of a Kolink Umbra aRGB PWM 120mm fan.

The Kolink Inspire K11 at a Glance:

The Kolink Inspire K11 in detail:

The K11 is characterised by an outstanding design and high build quality. It has a steel frame with a tempered glass panel, so you can display your gaming components. All that, and it's at an affordable price point.

In particular, RGB illumination is a great feature of the K11. The front panel consists of a strong aRGB strip alongside several additional indentations. These are perfectly complemented by the pre-installed rear Umbra ARGB PWM120mm fan. Since these illumination elements are aRGB, they can be controlled directly via the motherboard.

As a Mid-Tower, the K11 has all the room you need for the components necessary to make a powerful build. A full ATX motherboard can be mounted with space for a GPU up to 315mm long and a CPU colour up to 165mm high.

Cooling is also a priority for the K11. As well as the pre-installed Umbra ARGB PWM 120mm fan, three 120mm fans can be attached at the front, two on top, and another two above the PSU shroud. Alternatively, there is room in the front for a 360mm radiator and a 240mm in the top, should you want to integrate liquid cooling.

Connecting additional fans is straightforward, as it is possible to daisy-chain additional 3-pin 5V devices. Regarding storage, there is capacity for two 3.5″ or 2.5″ drives and also a standard ATX PSU. The I/O panel has two 2.0 and one 3.0 USB ports, as well as an audio in/out jack and power button. 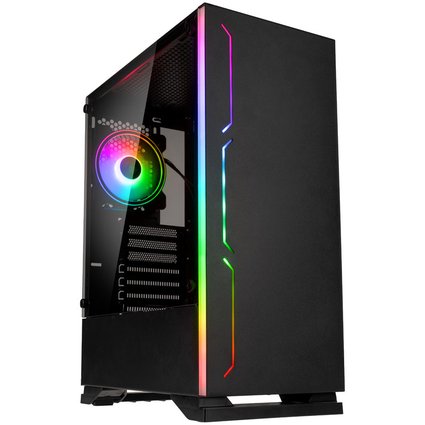