The Midi-Tower Kolink Bastion combines functionality with a restrained but chic exterior. Beneath the tempered glass side, the Midi-Tower is decorated with an addressable RGB-LED strip. Its colours shine out from behind an opaque acrylic glass strip. The colour scheme is accentuated by a rear fan with digitally addressable RGB-LEDs. The lighting can be controlled via a switch on the I/O panel, or by compatible addressable RGB motherboards using the 3-Pin connector provided. Furthermore, the spacious interior is more than capable of supporting lot of powerful hardware. A fine mesh with integrated dust filter on the top is also provided, ensuring your components are supplied with fresh air as well as kept dust-free.

- Steel front and top panel for a premium finish

- Side panel made of tempered glass with hinges

The Kolink Bastion: A Spacious Case for Gaming Hardware

Even if the outer dimensions correspond to a Midi-Tower format, the Bastion is designed to support a motherboard up to E-ATX in size thanks to its ingenious design. With 370 mm space up to the front, there is also enough room for even the longest graphics cards. In terms of vertical space, users will appreciate 160 mm of space available to allow the majority of CPU coolers to fit with room to spare. A cover conceals the power supply unit and the HDD cage in which two 3.5-inch or two 2.5-inch drives can be installed. Two 2.5-inch SSDs can be attached to the rear of the motherboard.

Those who rely on air cooling will appreciate the number of slots for 120 mm fans. Two 120 mm fans can be mounted on the power supply cover, while a removable air filter under the power supply ensures a dust-free supply of fresh air. The top of the case is fitted with a mesh through which air can flow with a minimum of resistance. Here, too, a dust filter ensures that the hardware inside does not need to be cleaned more often than necessary. A powerful 120 mm fan already occupies the available slot at the rear. The pre-installed fan is additionally equipped with front- and rear digitally addressable RGB-LED lighting. Of course, compatible radiators can be installed instead of fans.

Tempered Glass and RGB-LEDs to Set your Hardware Apart!

Even the motherboard tray is an eye-catcher in this case. Instead of boring squares and rectangles, the recess behind the motherboard has an original shape to it. Cable management in the case is a breeze thanks to the smartly placed pass-throughs and cable guides. The end result of your cable management efforts can then be admired through a tempered glass side door, which can also be lifted out at the hinges when needed. A strip of digitally addressable RGB-LEDs is attached to the front of the power supply cover. An acrylic frosted glass cover helps light diffuse evenly. A switch on the I/O panel is responsible for controlling the lighting effects along with a 3-Pin connector for compatible addressable motherboards such as Asus Aura & MSI Mystic Light Sync.

The pre-installed fan's lighting is also controlled via a compatible 3-pin plug (5VDG). Both can be connected to the two connectors of the controller on the I/O panel. A 3-pin connector is also available on the fan to which further RGB components can be connected. Alternatively, strips and fans can be connected to a corresponding 3-pin connector on the motherboard and controlled via its on-board software directly. This then allows the RGB switch on the I/O panel to be used as a reset button. In addition to the RGB/Reset switch, there are one USB 3.0 and two USB 2.0 connections as well as a 3.5 millimetre jack for headphones and microphones, alongside a power LED and an HDD LED. 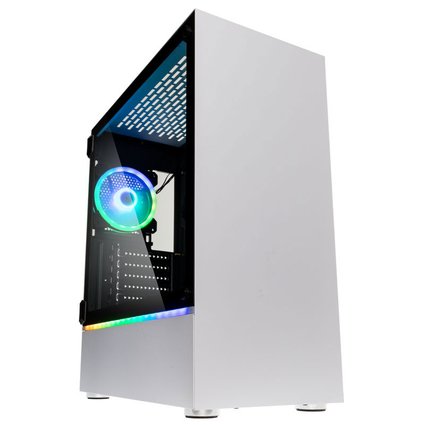