Kolink gave the Inspire K2 something that helps it stand out from the crowd: the front is equipped with a striking design as well as an RGB-LED strip which can be controlled via the motherboard or the I/O panel. Together, the front is reminiscent of a printed circuit board or a scene from one of the Tron films. The almost invisible recesses also serve to allow fresh air into the case. The tinted tempered glass side panel offers users a view of the interior, specifically of the Micro-ATX motherboard. Naturally this Micro-ATX case supports powerful hardware and plenty of drives that would combine to make this an exceptional gaming system. This makes the Kolink Inspire K2 one of the ideal cases for gamers on the lookout for something with great value and an eye for unusual designs.

The Kolink Inspire K2 Micro-ATX Case at a Glance:

- Tempered glass side panel and PSU slot in the top

- Light and easy to transport at just 3,9kg

The Kolink Inspire K2 is an extremely affordable Micro-ATX case that is, in style terms, oriented more towards gamers. It can fit graphics cards up to 32cm in length. What is particularly striking about it however, is the front with its angular aesthetics as well as its PCB-inspired look complete with cutouts to help draw air into the case. The look of the front is accentuated by the addition of semi-transparent strips, behind which lies an RGB-LED strip. At the top towards the front lies the USB 2.0- and USB 3.0 connection as well as RGB lighting controls that can alternatively be controlled via a 4-pin cable to the motherboard. A tinted, tempered glass side panel helps to round out the stylish design of the Inspire K2 ab. 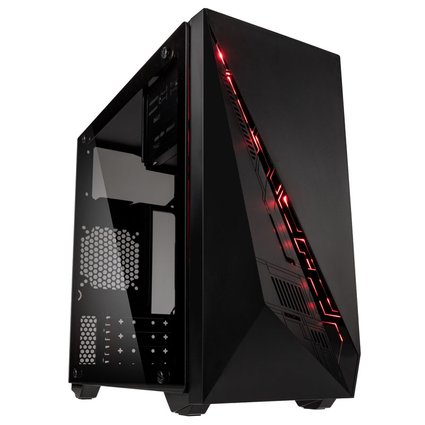