Big Chungus is the name of this spectacular showcase from Kolink, next to which almost every other case pales in comparison. Showing off your hardware from every side, the case is ideal for showing off a custom water cooling loop - and the fact that the huge case provides plenty of room doesn't hurt either. The materials used are first-class: The two sides, the front and even the lid are made of subtly tinted tempered glass. The base with the I/O panel is made of aluminium. The frame utilizes 1.0mm thick black powder coated steel. The unusual design from Kolink earned a unique housing with unique lighting, and the five pre-installed digitally addressable 120 millimetre RGB-LED fans and two ARGB-LED strips only emphasis its uniqueness. Still not unique enough? The lighting is digitally addressable too!

The features of the Kolink Big Chungus at a glance:

- Extravagant showcase for motherboards up to E-ATX

- Both side parts, front and lid made of tinted tempered glass

- Base made of high-quality aluminium

Big Chungus: The Perfect Way to Show off Hardware

The angular case sits slightly angled upwards on a distinctive base, which is also made of red anodized aluminum. The I/O panel offers excellent connectivity, with a modern USB 3.1 Type C port as well as one USB 3.1 and two USB 2.0 ports. With this variety of connections, almost all USB peripherals can be used directly on the case, whether keyboard and mouse, external USB data carriers or even smartphones, which can even be charged there.

Five 120 mm fans with digitally addressable RGB-LEDs are already pre-installed. Four of them adorn the front and can be admired via the tinted tempered glass. A further 120 mm fan, also with digitally addressable RGB-LEDs, is integrated into the single fan slot on the rear. Two additional 120 mm fans can be installed under the lid and three 120 mm fans can be installed in the bottom. Accordingly, the fans can also be replaced by radiators. 360 mm radiators can be mounted on the base and front, and there is room for a 240 radiator in the roof. The ATX power supply unit (available separately) is mounted beneath the three fan slots on the base and is hidden by the base. It can be up to 220 millimeters in length.

One feature that stands out visually is the versatile fan and RGB controller, which is mounted behind the motherboard tray. The five pre-installed fans with their 6-pin connectors are connected to it. The two ARGB-LED strips are connected at the side. Additionally, there are two slots for 3-pin fans on the underside. The RGB-LED lighting is controlled via an included infrared remote control. The controller/hub can also be connected to a motherboard via a cable, and the ARGB LEDs can then be synchronised with other ARGB components. 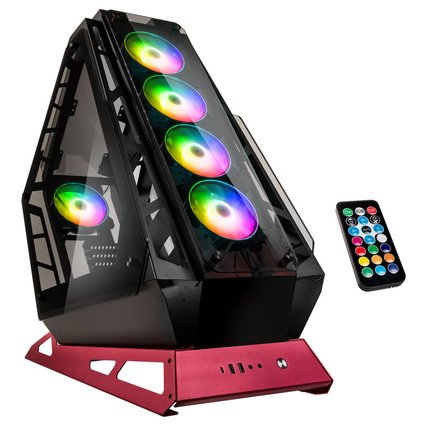